The alarm blasted in the ear at 5.45 am. We all crawled out of bed our eye lids firmly shut, sluggishly dressed ourselves to get to breakfast for 6.00 am. As we approached the dining room the alarm bells started ringing; there doesn't appear to be any lights on. We tried the door and to our horror it was locked. The horrible realisation that breakfast hadn't been made by the Mammas  felt like a punch in the gut. Lost in translation, they thought we were having breakfast at 8.00 am not 6.00 am. No sweet pancakes or egg omelette for breakfast for us today. Dry biscuits and an orange had to do.
We set off on the dreaded hour walk to Kisondela at 6.45 am. This was our third journey along this route and we were all pretty sick of it. We were tired, hungry and our feet were blistered but off we set. The walk was not fun but we did watch the sunrise. This beautiful scene made us reminded us how special this place was and how lucky we were all to be here. However, the walk still was still not fun. 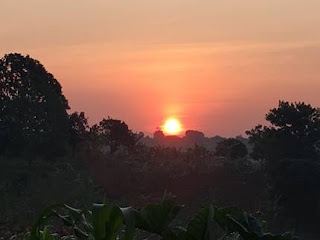 Today was a special day at Kisondela as it was the students' teaching day. This meant that all the students, in four different groups, were going to teach a topic to the Tanzanian students in English style teaching. The Tanzanian teaching style is very teacher led, which means the teacher does most of the talking and the students just take notes from the board. English teaching style is much more active, with the students getting more involved in the lesson. This was a great opportunity for the students to share their knowledge with the Tanzanians. Each group had to teach their prepared lesson to four different classes in Forms 3 and 4 (year 10 and 11 in England). The four groups were:
1.       Biology – a lesson on respiration. This group was made up of Luke, Christian, Hannah, Lucy and Abby. During this lesson the group got the students to measure their own breathing rate. They then took the class outside to do some exercise, this included star jumps and running. The class then had to measure their breathing rate again to see how much it had increased. They then had to use flash cards to match up the key terms to the correct definitions. Hannah said "it was eye opening to see the reaction to the more active teaching style despite the language barrier but it was lovely to see the enthusiasm from the students." 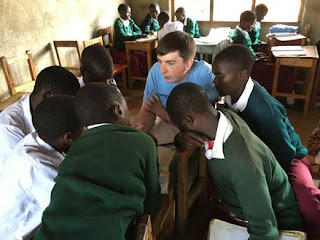 2.       Geography – a lesson on earthquake protection and survival. This group was made up of Yasmin, Alisha, Robyn, and Kate. During this lesson the students demonstrated how people who lived in earthquake prone zones protected themselves against earthquakes. The group demonstrated to the class the "drop, cover and hold on" procedure. This is when during an earthquake people would get under the table for protection. The class then had to do this several times throughout the lesson when they heard a siren go off. Another part of the lesson was to show how buildings can be made earthquake proof. To show this, they got the class to stand up while the students shook them. They then repeated this but this time the student had to stand wide legged. This demonstrated how much steady a wider base is than a narrow base. Yasmin said "it was nice to see how enthusiastic and eager to learn the children were. They responded to the new style of teaching so well and quickly, especially as student-teacher interaction in is not something they are used to." 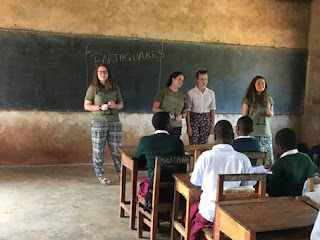 3.       Civics – a lesson on feminism. This group was made up of Ashleigh, Daniel, Beth and Jessica Jenkinson. Activities in this lesson included, the class using mini white boards to draw either a man or women on which job title was more masculine or feminine. The class then had a debate on whether women should be pastors in the church. Ashleigh Huddart said "that it was heart-warming to see how willing how willing the studnest were to both learn and engage in debate on such a contentious issue." 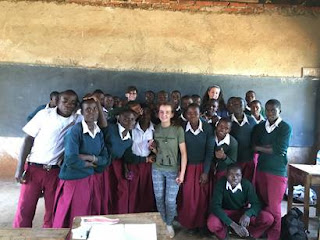 4.       English Literature -  a lesson on Shakespeare. This group was made up of Becca, Lucy Beck, Sarah, Jessica Kelly and Emily. After a brief introduction to Shakespeare the class discussed the three main genres of Shakespeare; gothic, comedy and tragedy. The class was then split into five different groups and each group had to come up with and preform a piece from one of those genres. Jessica Kelly, who was one of the students leading the lesson said "I really enjoyed teaching the Tanzanian students as it gave me the opportunity to work one on one with then. It also gave me confidence in my ability to lead a group."

Julia and I were banished from the classrooms for their first two lessons as the students didn't want us to watch them teach but as their confidence grew we were allowed in for the remaining two lessons. It was fantastic to watch our students control a classroom. The Tanzanian students were hanging onto every word they said. It was amazing to see how confident the students had become and how well they were working as a team to deliver the lesson, making sure every child understood and made progress. They had done us as leaders proud, the link proud and themselves proud. Many of the Tanzanian teachers approached me at the end of the day to inform me how thrilled they were with the lessons. They said the students had been excellent teachers and the Kisondela pupils had learned and gained so much from each lesson. The teachers even said they loved watching the different teaching techniques and were going to try doing them in their own lessons. This is what CRCL is all about, cultural exchange, learning from each other and seeing things through someone else's eyes.
After the school day ended a debate had been prepared. The proposal of the debate was if "bride price should be abolished." Our students were split into two equal groups and joined the rest of the school in the debate. After a slow and unsure start, our students starting heating up the debate as opposing teams argued for their case. It was amusing to see Christian (for bride price) and Ashleigh (against bride price) go head to head; both giving valid points for both sides of the argument. After a good 45 minutes the debate drew to a close, with the team arguing to abolish the bride price winning. As the only leader with the students at this time it was down to me to give a closing speech (my first speech as a leader in Tanzania). After thanking the staff and students for their hospitality over the last 3 days and discussing the importance of the links relationship with Kisondela, we then walked the hour long journey from Kisondela to the Bible centre for the last time. Thank God.
Andrew
Posted by CRCLink at 11:20