Today we returned to Lubala for the second day. After a long night of almost-home stays, returning to the Bible Centre late, we were all tired as the bus collected us at 7am. It turns out that the journey to Lubala takes longer than one hour, so after the Big Blue Bus collected me & Becca from Mama Mahembe's house, we arrived at school 30 minutes late. 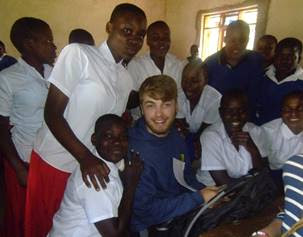 Students already had their timetables and went straight to their classes – Forms 4 (A & B), 5 & 6. From the students' timetables, we were led to believe there would be a wide range of lessons from English and KiSwahili to Biology, Physics and Chemistry. The reality of the day was somewhat different. The teaching style in Tanzania differs slightly from what I have experienced over the last 8 years of my career. "Flexible" seems to encapsulate the approach from the teaching staff. Some arrive 10 minutes late, some leave 15 minutes early, and some do not seem to attend at all.

As Andrew had remained at the Bible Centre to look after Ashleigh and Jessica Kelly; Carly & I also spent the day shadowing English & Geography teachers, respectively. Little did we know that a day "shadowing" would involve so much teaching. Carly spent two 1 hour 20 minute classes covering aspects of the present tense, whilst I taught China's One-Child Policy, the Demographic Transition Model, Population Pyramids and the human and physical Geography of Cumbria!

Classes were much larger than at Kisondella; form 2 classes had around 70 pupils per room, whilst numbers in form 4 ranged from 56 to an unbelievable 120 pupils – I wouldn't like to mark their exams! Certainly more students than we are used to in one class at home. Classrooms were basic, with long blackboards across the front of each class and the key teaching aid: a piece of white chalk. The Geography teachers that I worked with showed excellent subject knowledge and were able to produce sketches of drainage basins and cross-sections of the earth's core with ease.

We had another great lunch of rice and roast potatoes at the end of the school day, after nine lessons for some and less for others. We dropped Kate and Emily off at Imani's house on our way to Tukuyu for thirty minutes exploring the market for essentials like Pringles, Chocolate Spread and Kangas to make into various items of clothing – from dresses to pyjama trousers. The final leg of the journey home was too much for some, with seven students falling asleep on the bus. 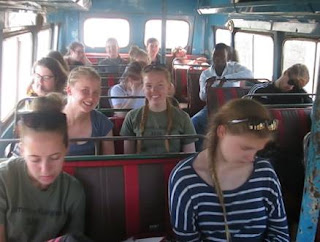 We returned to find Jessica and Ashleigh were much better after a day of rest; whilst Andrew was somewhat concerned by a wasp invasion outside (and in) his room. Life continued as normal this evening, with games being played, washing completed and the seamstresses arrived to collect the students' dress and clothing designs this evening… Let's wait and see how the sketches and measurements translate in reality.

As always, we hope you're all really well, we're loving the adventure and can't wait to see everyone again.