After a well-earned lie in until 8am, we had breakfast and lounged around waiting for Lulu (the beloved big blue bus) to take us to our specific primary schools. Myself (Jessica Kelly), Lucy Beck, Alisha, Kate, Ashleigh, Becca Williamson, Amy and Andrew headed to Kisa Primary School, where our good friend Kasitu, who came to England last year, is head teacher.

We were greeted at the entrance by Kasitu then escorted to his office where we met the District Education Secretary. He was very interested in the British culture, partially about the education system but mostly the Queen. This meant Andrew flourished in conversation as his not-so-secret passion for the royal family was able to thrive.

Following this discussion, Kasitu took us on a tour of the classrooms, showing us the work CRCL are funding. It's amazing to see that all our hours of face painting is worth it. We even saw some desks donated in 2006 still in use and still appreciated.

On the way to our tea break, we bumped into some children. I had the "great" idea to give them some balloons. This was our first mistake. So it started off with about 10 children playing happily with some balloons. Next thing we knew, basically the entire school had surrounded us with every child begging for a balloon. This was all well and good until Kate was pushed up against a wall and all we could see was a balloon and a hand in the madness as children practically began fights for a balloon. I meanwhile shouted for Kasitu's help to calm the children down but Kasitu being Kasitu just laughed at our panic. In one of these scrambles for a balloon, smaller children were trampled, luckily Andrew was there to save them.

After a quick cup of tea, we headed to the welcome ceremony. The ceremony began by the pupils singing the national and school anthem with pride. We watched a combination of dancing, music and acrobats. There was a tower 3 pupils high, children flipping off of one another's backs and a pupil on stilts- don't think they would pass a risk assessment back home, but was very entertaining nonetheless. We then presented the school with some gifts, which were accepted with cheers and joy.

We were then swarmed by children again on our way to lunch which consisted of rice, cabbage, chicken and other Tanzanian delicacies. The sight of sodas made us all very happy as the day had been long and tiring but definitely worth it.

We thought the excitement of the day was over but on the walk to meet the bus, we found a seemingly peaceful bridge with a lovely view. As we soaked up the sun and appreciated the view, a naked man ran out from underneath the bridge to take a dip in the small lake. Safe to say, it is not how we intended to end the day. 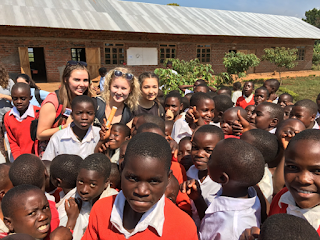 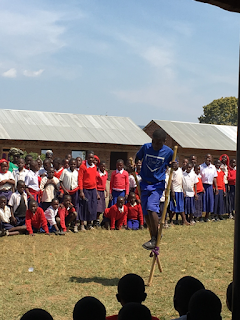 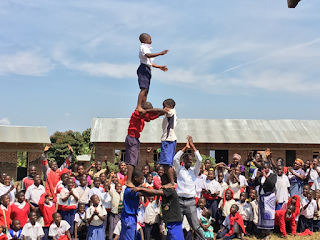 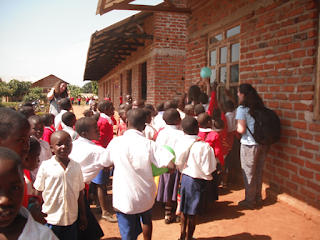