Today we started the day by the mama's making us eggy bread for breakfast at around 8 am before we left the bible centre on LuLu and headed for Tukuyu, where we were meeting the Tanzanians and our tea tour guide. Once we arrived in Tukuyu we waited for roughly 50 minutes for different people to arrive however, we also found out that the tea tours hadn't actually been booked for the correct day so instead we set off to look at other natural sights around Rungwe. 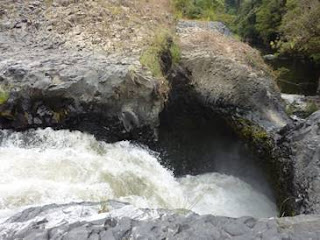 After an hour's drive on bumpy non tarmacked roads we finally neared the "boiling pot". We drove through a Tanzanian military compound before pulling up in a small village where we were greeted by the local children who followed us down the twisty path to the "boiling pot". The boiling pot was a naturally formed hole where the river had eroded the volcanic rock which formed a bowl shape where the river was swirling around. 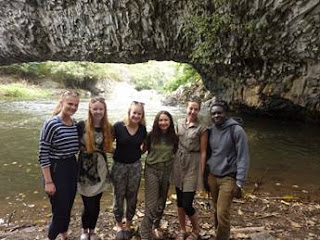 After visiting the "boiling pot" our bus driver 25 took us to see a pineapple plantation where we saw how pineapples grow. I never realised pineapples grew in the middle of strange looking bushes! 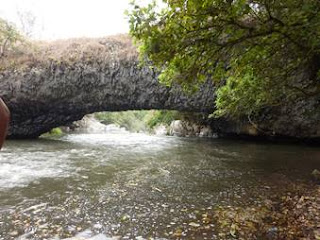 Our last visit of the day was to God's Bridge which was a naturally formed stone bridge over a river which had a waterfall behind but unfortunately we couldn't get to the waterfall to see it.

For lunch we stopped at a Tanzanian pub which is very different to in England. RCCL had already ordered us some food so there was a selection of chips myai and chicken and chips, which was delicious after our long day. We were also given soda and water.

Due to this being a late lunch around 3 ish we decided to stop off at the Tukuyu maket where we were given 2 hours to buy snacks for the evening as a few people were on home stays that night so we decided not to bother making a big tea. We also used this time to buy more material and kangas so we could get some clothes made by the Lutengano Fundi (dress makers).

After our long tiring day, we relaxed and enjoyed the evening by sitting around the compound chatting, snacking and playing games.