For many of us, this was our second primary school day – today, we were split into three and visited either Katumba, Masebe or Itula. For myself and a few others, we visited Itula for the day.

Upon our arrival, we were greeted by around 200 children, aged 4 to around 11, jumping up and down excitedly. As we got off the bus, the children were fighting one another to shake our hands and tell us we were welcome at Itula. The excitement was mounting for the day's programme, for both English and Tanzanian students.

We were taken away from the ensuing chaos into the headteacher's office, where we were introduced to various members of the school board and teachers. Emergency chairs were a necessity for the many of us squeezed into a small office. Many more shikamoos and marahabas were exchanged while a visitor's book was hurriedly passed around the office – we were eager for the day to really start.

Afterwards, we were given a tour of the school – Itula is the poorest school that the Link is involved with, and we already knew from Becca that a classroom had been badly damaged from wind shortly after the last outward to Tanzania. When we got to the classroom, we were able to see the full extent of the damage: the roof and top half of the wall had been completely torn off in the wind, and the holes in the floor in many of the other classrooms were far more frequent in this room. 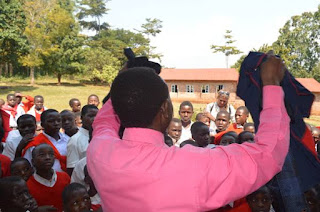 What this means for the students in terms of their education is that standards 1 and 2 (equivalent to reception and year one) receive half the teaching time, with standard 1 spending the morning learning and standard 2 spending the afternoon learning. The children in this standards are then at a disadvantage to other students in the area who receive the full time teaching – project proposals are aiming to change this, first by fixing windows and holes in the other classrooms, then by focusing in on the badly damaged classroom. It was eye-opening to see the contrast between English schools and Tanzanian schools, particularly at Itula.

After our tour, we sat down on more of the wooden chairs put out by some of the older students, and watched some dances and a showcase of talents from the pupils. Running with a full glass bottle on their head, high jump, dance routines and what can only be described as twerking involved. Safe to say, we were all hugely entertained and as usual amazed by the complete talent of the Tanzanians. We also witnessed a near-death experience in one small boy doing a handstand-flip onto his head (he was absolutely fine, or I assume so as he bounced back up like it was part of his routine).

We took some turns at teaching them a few Western primary school songs – heads, shoulders knees and toes and if you're happy and you know it, led by Jessica Kelly and I. Despite only knowing very basic English, the students got really into it which was heartwarming to see. The teachers, those not filming us, also joined in the songs – the entire school body had surrounded us.

Once we were done with the performances, we were invited to join a Tanzanian game, the rules of which were fairly easy to follow: do not get hit by the ball. One child stood at one end of the grass, while a second child stood at the other, and a large group of children in the middle that we joined. Those at either end threw the ball, hard, at the crowd in the middle who were trying to dodge it. All the wazungus (white people) were invited to join, and us few that did join in were no match for the students.

Afterwards, we had dinner and came to spend some time with the children – this involved a football match. Our group for the day was split between teams of Tanzanian students, and one philanthropic teacher that soon began playing for both teams as soon as he realised how poor our football skills were. After Kate fell flat on her back, and I knocked over a small child, the match ended with the opposite team winning 1-0. The children were playing football, some with no shoes, with a goalpost made of sticks and a basketball, and they completely beat us.

To end the day, we presented the school with some gifts brought from back home, and Becca let the faculty and students know that we're working towards making some improvements to the school's infrastructure. Pencilcases, stationery, books and sports strips were among our gifts, and the children were incredibly grateful. It's amazing being able to see the impact such small things to us can make. We picked up the students from Masebe, who sounded like their day had went just as well as ours, and drove back home on Lulu, looking forward to the next day.