Today was the day of the inaugural Tanzumbrian sports day. The day began by each of the four teams; green, blue, red and orange, donning their team colours and exchanging pep talks with one another. After breakfast all four teams walked the short journey to Lutengano school. Once the group arrived they were welcomed to the school by the headteacher and signed the visitors book. The whole school then sang the Lutengano school song, which we were privileged to be able to hear. The Cumbrian leaders and students introduced themselves, followed by the Lutengano teachers. Then we were showed around the school in our sports teams where we were showed the classrooms, the dormitories and the school plantations. As with the other schools there was a stark difference between the Lutengano classrooms and what we are used to in England, but this did not affect the students' ability to learn due to their motivations. It was also great to see the foundations of a new block of the girls' dormitories which some of the money we raised was funding.

When 11 o'clock rolled around it was time to assemble on the school field for the games to begin. We assigned Tanzanian students from Lutengano, Lubala and Kisondela to each of the four teams – each of the teams looked evenly matched (with the exception of the green team who looked like they had the physical advantage). With the 11 members of each team assembled in each corner of the field they striped their face with the team colours and decided who would compete in each race.

The first race was the egg and spoon – a new concept for the Tanzanians' and a time to shine for the English students – especially Robyn who won first place for the English students. The next race was the long distance – a race around all of the Lutengano school grounds. This was unsurprisingly an easy win for the Tanzanians without an English student in sight. The race was won by the blue team allowing them to take an early lead. The third race was the three-legged race – another win for the blues after two teams were disqualified for badly tied kangas. A coconut throw was next and despite some surprising attempts from Gama and Luke, John won the event as expected.

After the 100m sprint, the potato race, the sack race and the relay it was time for the team events – the first of which was the tug of war. A surprise substitution of Carly for Ipyana, the Tanzanian breeze block, and the transformation of Abby who turned various shades of red and would have been able to pull the rope herself, the Orange Team managed to win the event with ease. The fate of the four teams now rested on the final event; tunnel ball, an alien concept to most of the competitors but all teams coped well, with the blue team just scraping a victory.

After the teams had a chance to rest the results were in and it was time for Andrew to present the Tanzumbrian Cup. The team in 4th was the Reds, followed by the Greens and the Oranges leaving the Red team (who were surprisingly gracious in their victory) to lift the Tanzumbrian cup. All participants of the sports day had a meal at the school and then we returned to the bible centre in high spirits.

At the bible centre, Ano was waiting for us with equipment to make batiks and tye 'and' dye kangas for the Link to sell and raise money for next year's inward trip. We started by printing zebra and giraffe prints for our batiks and then we worked on the tye-dye materials. The final result was very impressive, particularly the sambosa-style kangas. Get your wallets and purses ready ladies and gents – coming to a charity sale near you. 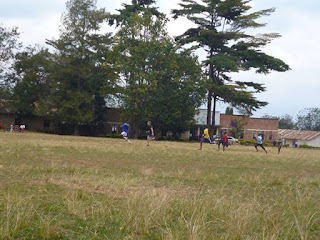 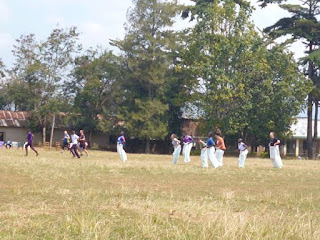 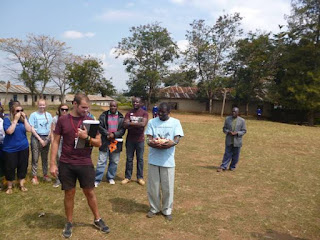 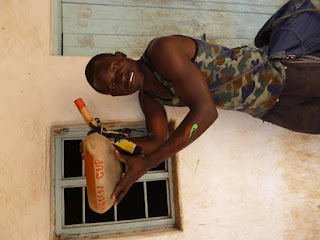 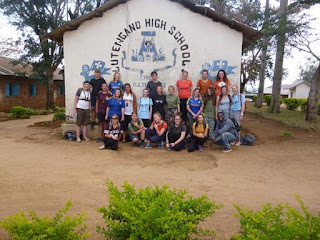 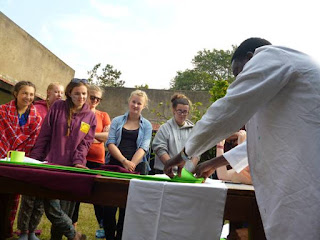