We woke up to another thud on the door at the ridiculous hour of 6.30am reminding my cook team that it was our turn to cook breakfast once again. To our delight, not only for the traditional homely food but also for the ease was scrambled egg and bread.

We then set off at around 7.15am to Lubala Secondary School on our luxury mode of transport, Lulu. We made a pit stop at Katumba 2 to drop off a small group of students and as the bus climbed up the steep, bumpy hill we tipped at about a 45-degree angle! We had to snap back to reality and remind ourselves that we weren't actually on a jeep safari and 25(our bus driver's nickname) found the whole event hilarious as apparently this is the norm in Tanzania. 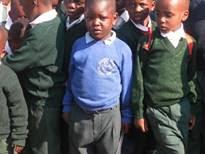 After our 'incident' we carried on to our second stop which was Mbuja English Medium School and we were greeted by a crowd of jumping infants. The whole group were amazed at the standard of English from the children aged between 4-9 and it was heart-warming for us to know that they were likely to thrive in their later years of education. We were welcomed by performances from the children and this included songs, book readings and bible verses. The student's enthusiasm and joy was contagious and we found ourselves smiling for the whole duration. We then taught the children an English primary school classic, 'head, shoulders, knees and toes' and they picked it up instantly! We were then informed that in order to reward the children, they received a special jumper to wear and they were Cleator Moor Nursery jumpers which had been donated to the school by the link. Following this we then said our goodbyes to the students and staff after being reassured by the Headmaster that there were plans for the school to grow in the near future. 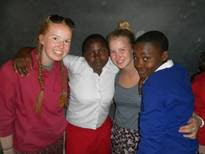 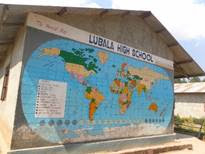 After surviving more of the treacherous roads and ridiculously thin and flimsy bridges we eventually made it to Lubala Secondary School. After being greeted by the Headmaster and signing the log book we then had 'breakfast' at 12pm and much to our surprise this consisted of a samosa, bread and an egg. We then took it in turns to introduce ourselves on the podium in front of all of the students, there were over 900! After this we were given a tour of the school compound and it was lovely to meet new students whilst doing this. It was so rewarding to see how our money has been successfully funded into a variety of projects within the school. Lunch consisted of the typical Tanzanian foods; rice, potatoes and pea curry followed by an orange and today we actually got a spoon so our hands remained clean for the first time in a few days. 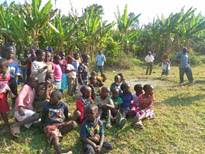 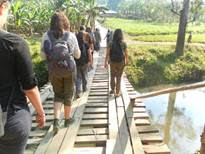 We then travelled to a nearby village to watch some traditional tribal dances and within seconds we became surrounded by intrigued young children. It was lovely to see the locals presenting their dances and it was evident that they were particularly enthusiastic and proud of what they were showing. On our way back to the bible centre we called into the market and although we were initially planning to meet with the dressmakers in the market, we only had time for the essentials (food) due to things overrunning throughout the day, typical Tanzanian time. We arrived back to the bible centre at around 7pm and then Cook team 1 had to cook our evening meal despite the fact that we were all exhausted after the long day. After the majority of the group fell asleep and had consumed a ridiculous amount of Nutella whilst waiting, we finally ate at 9.30pm. It's safe to say that it was not worth the wait as the rice both smelled and tasted like an ash tray however the meal contained some cheese some we made sure to eat the cheesy sections!

After a long day we then fell asleep relatively early, looking forward to the shadowing day tomorrow.