This morning the cold weather surprised us all; although we were warned of the cool climate, few of us believed it. For breakfast we were presented with hardboiled eggs and homemade bread, although the bread was wider than my face and drier than sand, it was tasty. Afterwards, we were told that Imani and Charles would be coming to visit - obviously that was met with much excitement. As a result, we all waited in the courtyard anticipating their arrival. Instead we met with former Tanzanian Link students, including Lusekelo, Gama, Merisianna and Rooney. It was interesting to meet students who have previously visited England. They all their pass their love to their hosts and friends back in Cumbria.

As we were talking to Gama about life and philosophical ideas, four local children came over to meet and play with us. No older than four, they were tiny and didn't know any English. Most of the children were shy to begin with, however, by utilizing our amateur Kiswahili skills we managed to find out their names- "Jina laku nani?". Some of us soon noticed that one of the little boys had infected cuts up his leg, so we got Andrew (our group first aider) on the case to clean and dress the little boy's wounds. Soon they learned how to use our cameras and between the four of them took around 500 images, mostly of people's feet but some images seemed to promise a talent for photography.

Once the children left we all moved over to the courtyard to lie on blankets and listen to music through our speaker in the sun. We all relaxed there for a while listening to throwback tunes e.g. Avril Lavigne's Complicated and McFly's Star Girl. Belta and Juliet arrived and stayed with us for the afternoon, John arrived and offered to give us all a tour of the local area. Unexpectedly, Juliet told us she would have to go and that this would be the last time we would see her. It was surreal to think this was the last time we would see her, we all had our final photos and final goodbyes. We all waved as she exited in style by jumping on the back of a motorbike.

A few hours later Imani rocked up in style on the back of a motorbike, which caused much uproar within the group. It was great to see Imani reunited with his hosts and the rest of the Tanzumbrian family. Meanwhile a few of us went off to get some drinking water from the well, little did we know the challenges that would entail. With one man down, hundreds of thorns stuck on us, we finally made it back up the hill with 3 buckets of water. Upon return Julia and Sarah used tweezers to pull all the thorns out of our legs- which was surprisingly therapeutic.

Charles finally arrived (only 10 hours late) which after many tearful reunions meant we could finally sing Natembeya which only feels right with Charles as the lead. As soon as he began singing the tears returned, hearing Charles made us reminisce to last year and reminded us all of the relationships we've built with the Tanzanian students. It was great to end the day hearing that all the Tanzanian students are doing well and we're all so excited to spend the rest of our trip with them. 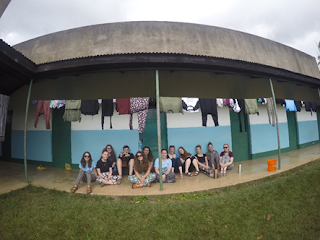 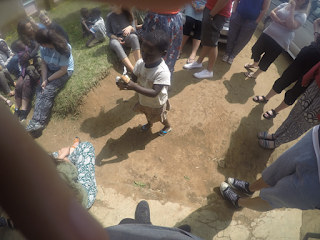 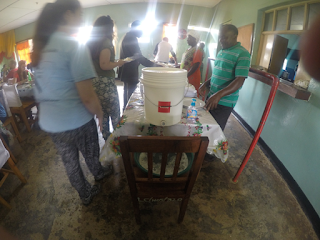