When the blog rota was made up by Amy, I was so excited to have been given the Tazara journey. Of all the amazing things we get to do in Tanzania it is by far one of my all-time favourite Tanzanian adventures and having missed the opportunity in 2014 I was so excited, and worried (perks of being the leader), to spend a full 24 hours (maybe more depending on break downs) on Tazara.

We began the morning with military precision, breakfast, paired up and making sure all personal rucksacks and day bags were out the front and the group bags. We waited, semi-patiently, while Julia recounted the note she had been left after Howards safe return, for the bus. When the bus arrived we shot to action, the pairs came armed and ready with their bags and took responsibility for their group bag to load on the bus. Safe to say there was some tired arms, ours included, but it's all worth it when the gifts get given to schools in Rungwe.

Packed full to the brim the two buses carrying all our possessions and us left the Salvation Army, our home for the last few days. The luxury renovations which have happened over the last two years were a welcome but incredibly misleading sign of what's coming up for the students and new leaders …

Our journey to Tazara did not take too long and we unusually only sat in traffic for half an hour. Once we arrived, armed with a number of trollies, we loaded our bags on and set up camp in the train station. The snacks our leaders went to get that morning, despite being reminded, were left on the bus which meant a long wait with no food … or did it? Once we had our base we went off in our groups to have a look and see what was around, this included a little kiosk where the students had their first proper, albeit small, experience of shopping and haggling where they bought sambusas and sodas for the wait. 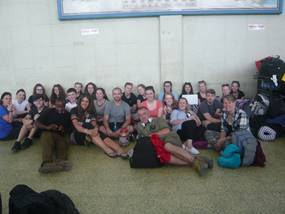 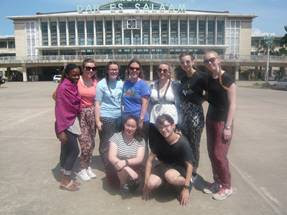 Train time and there seemed to be a ripple of movement around the station and hundreds of passengers began to move collecting their belongings and family ready to board. Unfortunately, this did not lead to actually boarding and happened a few times before eventually, when the anticipation got to great, we actually began to board. Tickets thoroughly checked for the third time we were allowed to pass and finally board. Here began the heavy lifting. We had the entirety of carriage three and so a third of us loaded on to the carriage to the seven different compartments, the second third stood guard while the final third began to lift the bags through the window. The first third had their lifting chance and began then to lift the bags to the roof of the individual compartments. All captured on go pro to show the reality of Tanzanian travel. Another demonstration of military precision and yet more waiting to set off. 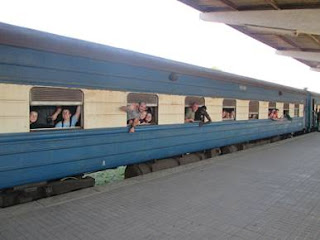 What followed was a few hours of awe and amazement. I watched, overwhelmed, as the students and leaders were fixated on the view out the window. Watching all the faces as we travelled through the Tanzanian city to countryside made me, once again, incredibly proud of our link and so proud of all their students for the last two years. Seeing it through their eyes is making me see what I saw on my first visit in 2008 and the wonder and amazement I saw on that very journey, for that I was grateful. 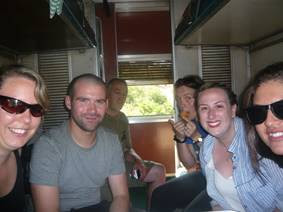 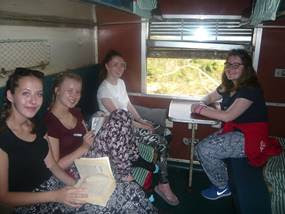 The journey is long but we managed to make our own fun. We took a walk through all the classes of the train, to which the students were amazed by the fact that third class don't have beds and some people sit on the floor for the whole journey. We chatted and played card games and again I was reminded why the experience is unique as I watched students and leaders (myself included) usually preoccupied with technology like phones and tablets on long journeys actually interacting with each other. 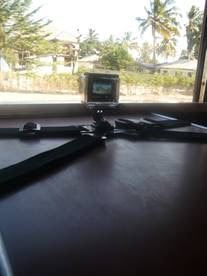 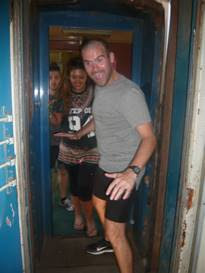 Food on the train was an experience we had a range of kuku na wali (chicken and rice), nyama ya n'ngombe na wali (beef and rice), samaki na wali (fish and rice) and ugali. The food itself wasn't a challenge, what was challenging was the lack of cutlery and table coupled with the fact that the train is incredibly bouncy, we were lucky to keep hold of our food.

When darkness fell the students began to believe me when I had said it gets incredibly cold and my advice to pack a jumper in their day bag was thought of as golden, although I had been scoffed at earlier as it was so warm. The socialising continued until about 11pm when the group began to fall asleep (in the freezing cold conditions) bar the odd few who were still chatting away. 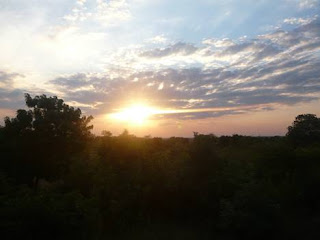 The night seemed peaceful except the bouncy-ness and the ever erratic breaking continued through the night. Lala salama everyone, hope you're all enjoying the British summertime, which we hear is warmer than Tanzanian winter.