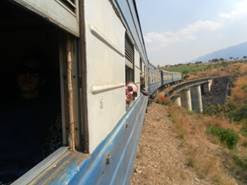 We woke up to the ice cold weather of Tanzania and the violent shaking of the Tazara, described as 'an earthquake simulator' by members of the group. It's fair to say none of us had the best sleep and it didn't get much better when breakfast arrived. Who doesn't love cold omelette and spaghetti with grated carrot? But it was all part of the exciting experience. During the rest of the Tazara, we talked and relaxed and peered at the beautiful Tanzanian scenery, longing to spot some impressive animals… surprisingly we had no luck. It was eye-opening to walk down the train through the different classes and talk to the locals and experience their normal way of life. 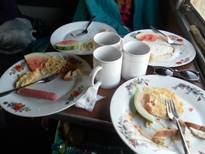 Finally, after 24 hours we arrived in Mbeya, and after eventually piling all of our bags out of the train windows, we were greeted by the enthusiastic members of the RCCL including Paison and Katisu who were a part of our inward visit. The next task was to load our bags onto Lulu, a bus that the CRCL had funded in the past. It was a challenge as there was only a small ladder leading to the roof where our bags were being placed but the Tanzanians took it in their stride and made it look easy. 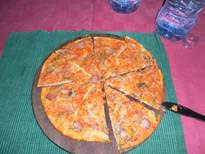 The next 15 minutes were filled with singing and dancing along to traditional Tanzanian songs which made us all feel like we were truly in Africa. Then we stopped off to eat a late lunch at around 4.30pm which was needed after the Tazara breakfast. We walked in and our mouths started to water at the sight of something amazing… pizza! It was an amazing treat from our RCCL friends which made us feel so welcomed and grateful.

The last part of our journey, which took around 2.5 hours, lead us to Lutengano, the town where we are staying in Rungwe. We emptied Lulu, found our rooms and then went straight to tea which was prepared by the mamas. Even though we were full from our pizzas, we couldn't resist roast potatoes and noodles. Then, we faced a serious task, Lulu was in trouble. She had got herself stuck in a ditch, and needed our help. Some of us sat inside the bus by the wheels and others had the job of trying to push her. The strong smell of burning rubber was alarming but we managed to save Lulu and she was on her way soon. 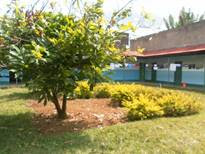 Whilst sitting and talking outside our rooms, we heard footsteps and looked up. It was John and Belitha. It was such an amazing surprise to see them again after a year and happy tears were definitely shed. After our surprise, we all talked and relaxed with each other which was exactly what we needed and it was also lovely to meet Victoria, Belitha's friend. At around 10pm, our Tanzanian friends had to leave and we were all ready for a good night's sleep after a long two days of travelling. However, before we could get comfortable, the animals of Tanzania made an appearance. The boys found spiders the size of their hand in their room and in the wardrobe draws and we had a frog in our room that is still to be seen again. After this slight incident, that included a small amount of screaming, we got tucked into bed, ready for what the next day would bring.