On the morning of the official visits we were greeted with pancakes and sugar for breakfast, which was a good treat, after eating hard boiled eggs. After breakfast we finished getting ready wearing our 'posh' outfits, joined by Charles and Imani, and then hopped on Lulu the bus. We drove to Tukuyu town, driving over the ever so bumpy roads. We got to the District Education Offices and the District Council, where we met the district commissioners. After lots of 'Shikamoos' and handshakes, all of the CRCL and RCCL leaders went in to meetings to talk about the Link and what we do, and what we have accomplished so far. Robyn omitted 'Mimi ni' from her introduction and said 'Shikamoo Robyn', basically telling the commissioners she respected herself. 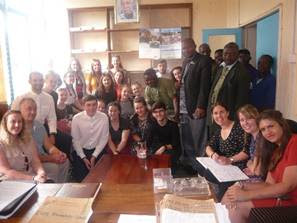 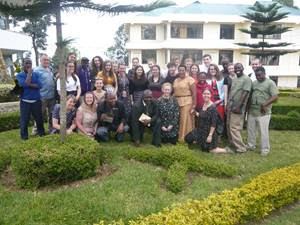 Later on in the day we drove to the Mission Head Office, which was around a 35-minute drive from Tukuyu, where we all collected as a group to hear some speeches from the commissioners, we all introduced ourselves, and at the end we were encouraged to answer any possible questions we may have. We were escorted to the next building where all of the students were able to sign the guest book (which dated back years so Julia, Becca and Amy were able to see their signatures from when they were students. There was a small museum next door which showed a quick history of the Moravian Church, which was a real culture shock, as one of the Chiefs had over 100 wives. Before we left they gave us coconut biscuits with a soda. We went for lunch to a hotel (that had really pretty floral chairs) where the food consisted of chicken, chips, rice, beef and a variety of stews. 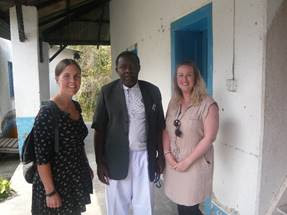 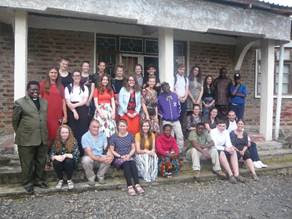 We were all really eager to finally see what a Tanzanian market was like; so after lunch we went to Tukuyu market where each group had a shopping list. In Ian's group we got 72 bananas for around 10,000 TSH, only to later find out they were plantain (disaster!). However, we managed to get most of our things within good time, which meant that we were able to go and look for personal things, the tiny streets were all a sea of different colours, from the kangas, to the fruit (FYI fruit in Tanzania is amazing – so much sweeter than what we have in England!). Not to mention they actually sell Cadbury's Dairy Milk bars at the market – which is perfect when you are needing a taste of home.

No pictures of the market this time, I promise for next time, but here is a hilarious photo of Luke guarding the eggs on the way back.